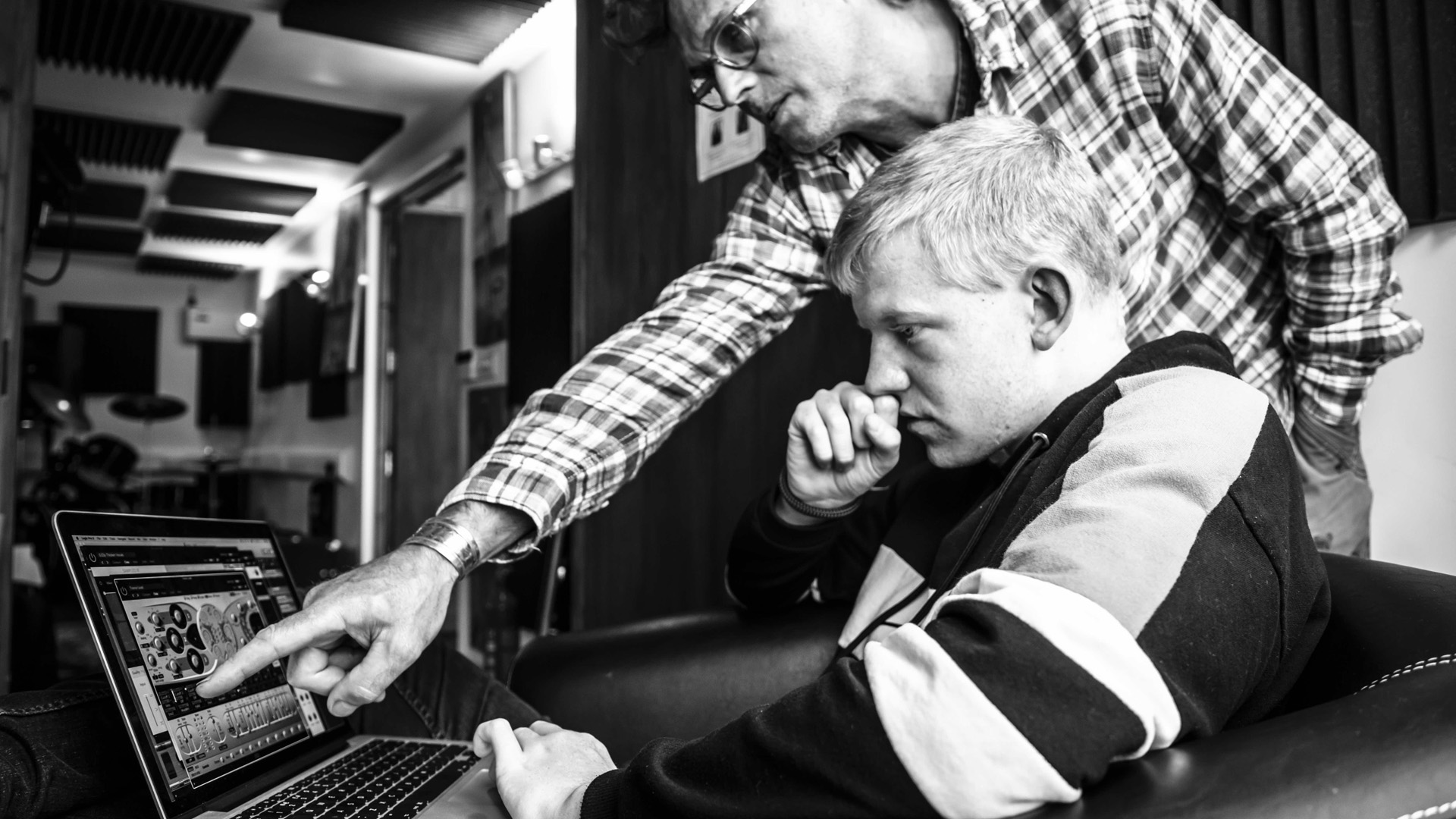 When Sundial Studio opened its doors for the first time, there were no preconceptions about how popular it would be or the level of significance it would have on young people’s lives.

Years later, it’s that same relaxed and un-pressured environment that is encouraging students to push their boundaries, to challenge their inhibitions and build their confidence, not just through their musical talents but in everyday life too.

“F showed no anxieties, G was calm and a leader and E who doesn’t talk to the staff at school stuttered but tried again and again and spoke clearly to do it better the second time.”

Predominantly used for the students at Stepping Stones School, whether you’re using it to record professional music or simply learning to use various musical instruments, Sundial Studio offers the perfect creative outlet for all abilities. The musician behind the sessions, is Anthony Clark who started at Sundial 6 years ago around the same time that the studio was built. Ant has worked in the music business for almost forty years as a producer / musician and singer with such luminaries as; Rod Stewart, Rick Astley, Cliff Richards, Lionel Richie and Elton John (to name a few)! His original position was in an individual coaching capacity, but this has since developed into offering weekly classes delivered both in a group setting and on a one to one basis with the ages of students ranging from 12 to 16 years.

“My role at Sundial has become one that could probably be best described as musical therapist, teacher or student guide. I spend my time with them in a range of differing modes depending on what each student seems to need; or more specifically, enjoy. This ranges from one on one programming, song writing tuition and lyric writing, musical theory, production techniques, shooting, compiling and editing of videos for original songs, sound engineering and mixing, singing cover versions to an original or a backing track through a PA system, changing guitar strings, group discussion sessions for podcasts, and much more without going too heavily into detail.

I sincerely believe that the power of music as a medium acts as a highly positive and therapeutic agent for all pupils concerned in these different applications, and I notice their elevated sense of mood and disposition when they perform and create music, or even just being in a neutral and creative environment like Sundial studio.” - Anthony Clark

Sundial Studio sits alongside the Arts, Woodwork and Technology programmes that are all available to supplement students’ curriculum. Having the opportunity to stimulate their creativity has proved to be vital for many of the students and Sundial Studio in particular has seen individuals’ communication and confidence soar. Performing in front of a crowd of over 1,000 individuals is a fairly daunting task for many, but it is something that many strive for and accomplish after rehearsing in the studio. For others, accomplishments aren’t always appreciated in such a public setting, but their progress remains equally significant.

“Today was everything sundial should be. We had F, Gand E up here until half 12. They were busy cleaning and fixing and being fantastically focussed on jobs I gave them in the workshop and then went to the music studio and somehow from last week’s trial and testing with the microphones they have come up with a podcast structure and theme. They all have pseudonyms, have a setup and took two takes, of where they listened to and improved upon it.”

Whether it’s the reassuring setting or the quality of the teaching and the manner in which it’s delivered, there’s something special about Sundial Creative Arts and its understated exterior doesn’t quite do justice to the magic that happens within.