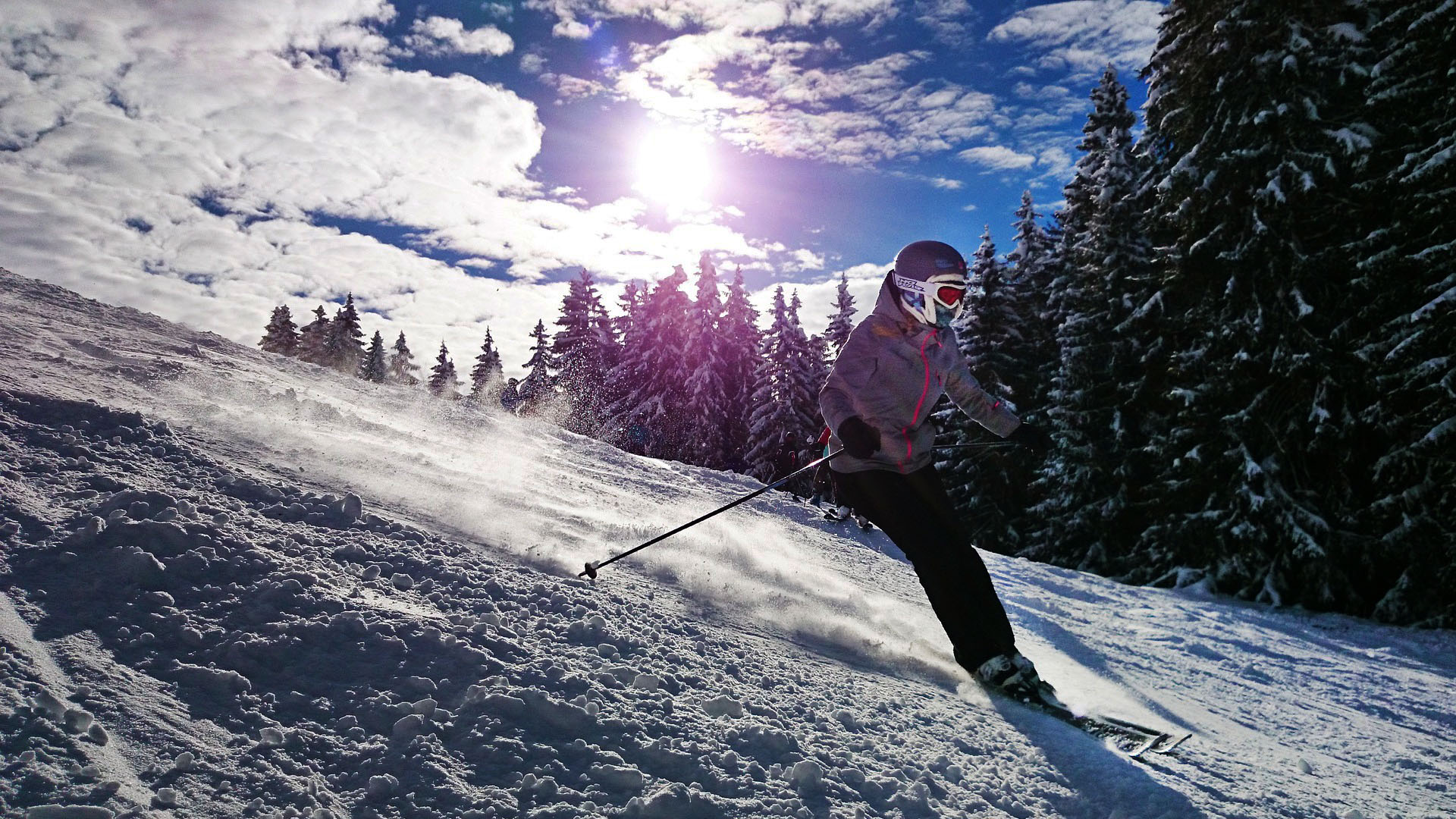 Skiing into the Unknown

The mere concept of sidestepping along a ledge at the top of a mountain that has a drop on one side and a ski run on the other just to get to your desired route makes me feel a bit anxious, but Laura calmly described it to me in a matter of fact manner:

“The tip is to point your skis in the direction of the ledge. It’s a bit scary, but Chris says that if you’re not living on the edge, you’re just taking up room!”

For 32-year-old Laura Passay, this is a small part of the many challenges that she faces when she heads to the slopes to pursue her hobby. Registered blind since birth, Laura can see vague outlines up to a maximum of roughly one metre away from her. She explained how lighting has a big impact on the strength of her vision as the relies on the contrasts in colour, so situations involving bright sunlight or dim lighting hinder her vision further. Currently working as Fleet Administrator for The Dog’s Trust, Laura started skiing in 2012, when a contact through her friend encouraged her to get in touch with Chris Pickford from Snow Therapy.

“Laura is a technically strong skier, she can competently perform race turns and although she’d still like to get faster, she’s pretty fast already!” - Chris

A fully qualified ski instructor, Chris specialises in coaching adaptive skiing for both adults and children from his base at Hemel Hempstead Snow Dome. With years of experience under his belt and various adaptive equipment, Snow Therapy has brought the freedom of skiing to people of all ages and abilities, some simply wanting to enjoy the thrill of riding down the slopes whilst others show competitive ambitions. In addition to coaching in the UK, Chris also travels abroad to assist individuals or small groups on skiing holidays, including to our own social enterprise hotel, Birgkarhaus in Austria. For some of the younger skiers, this allows them to participate alongside their able-bodied peers or family members, where for others, like Laura, it’s a chance to enjoy skiing abroad whilst improving her skills at the same time.

After taking skiing up initially as a new activity, Laura has progressed from skiing with reins, where Chris would ski behind her and help to control her speed in the confines of Hemel Hempstead indoor snow dome, to relishing the freedom of the Austrian slopes. She relies solely on the feel of the snow to determine conditions, which affect her speed and steering and Chris now skis ahead, shouting directions to her so that she can follow his voice, warning her about any upcoming challenging terrain or other dangers. A huge element of trust, over the years they’ve evidently built up a strong partnership on the snow and Laura speaks fondly of their adventures, crediting much of what she has achieved as being down to Chris’ support and encouragement.

“Chris is a fantastic instructor – he is so patient, he knows your limits and doesn’t put you in uncomfortable situations, but he also gives me the confidence to challenge myself.”

As if the challenge of being unable to see what’s ahead of you isn’t difficult enough, her limited vision also affects her balance and she suffers from chronic migraines and anxiety. Last year she even had to stop in the middle of the slope because she got cramps in her leg due to an ongoing injury. She had previously been apprehensive about going abroad, concerned about whether she would be able to cope with the conditions, but she now jokes about past trips describing how they play follow the leader with her friend Reshi, another visually impaired skier who travels away with them.

Laura was especially complimentary about the part that Hotel Birgkarhaus, where they stay, has played in making her trips so enjoyable. As she recalls tales of the staff playing with her guide dog, Ivy, it’s clear that the friendly and relaxed atmosphere makes it a feel like a home from home for both of them.

In a few weeks Laura will be heading back to the Austrian slopes but for the first time they will not be travelling as a trio, she will be going for two weeks intensive training on her own with Chris. Excited by the prospect of having the time to improve her skiing further, Laura is keen to build on her existing progress to get more independent and ski faster downhill. Joining them will be Laura’s guide dog Ivy, who they will be taking ski touring off piste whilst they’re out there aspart of Ivy’s holiday activities. Laura confessed that the biggest mental challenge for her is tackling new routes as she’s never sure what to expect and if she can cope, but she continues to prove that if you can find a way to overcome your fears, who knows where the unknown can take you.