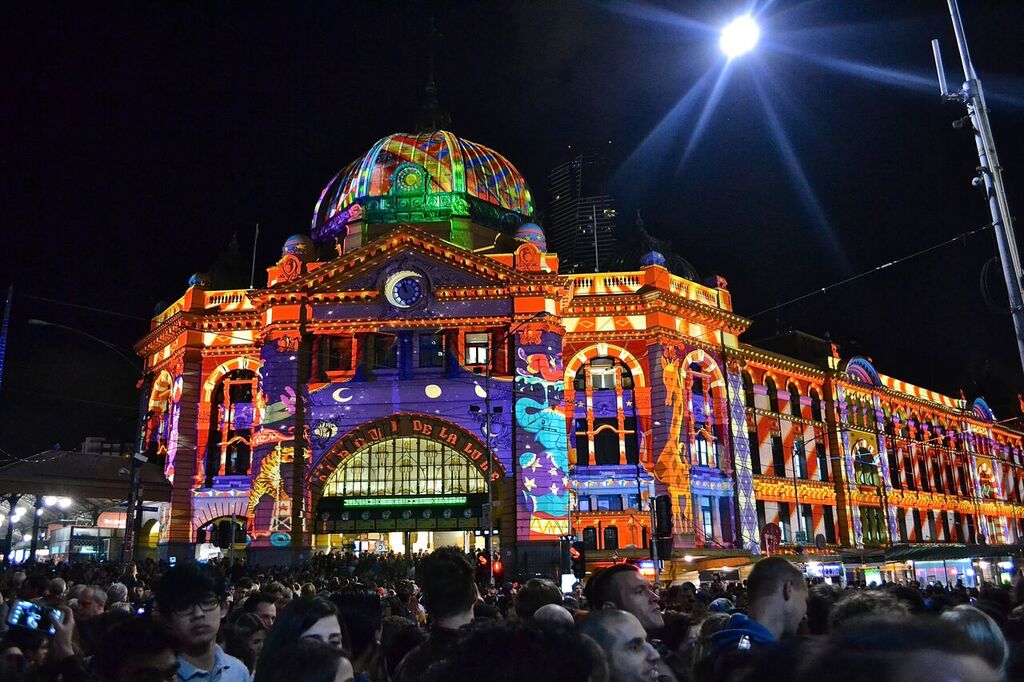 Saturday evening at White Night Melbourne and walking through the pedestrianised city centre, you can feel an untapped excitement hanging in the air.

As the crowds build, we all share a common interest in the night skies turning to dusk and the city celebrating art, culture and creativity until dawn!

Upon arrival at the Riverslide, I find the concrete skate park consisting of ramps, jumps, pipes and steps. Various areas of the concrete are painted in blue, allowing the surface to become a visual canvas as dusk hits complimented by the amazing backdrop of towering city skyscrapers, the Yarra River and nestled within Alexandra Gardens.

The White Night event was providing the platform for Big hARTs Project Skate to kick off, seeking to find a minimum of 10 skilled skateboarders. The aim is to bring raw talent from galvanised skateboarders into a studio environment, creating a skateboard-based live performance for touring theatres. Think of the show, Stomp, however, this show will be on wheels! The show is aimed at mainstream audiences that will combine the use of pioneering lighting (ENESS – think Tron), sounds, movement, 3D projection mapping and motion capture. The Skate project is a social enterprise strategy designed to generate funds to sustain Big hART’s vital community projects within Australia.

There is a cute café come skate shop, where I began to discover skateboarding isn’t just a sport it’s a way of life with its very own ethos. The art, fashion, language, music and design are as important to skateboarding as the individual’s performance on the ramps. In the words of Tony Hawk;

“I consider skateboarding an art form, a lifestyle and a sport.”

An example of one kind of such art is displayed inside the café, where I discovered a wall covered in ‘board-art’ skateboards.

On the veranda of the café, we sip hot tea and coffee while avid skateboarders sign up for Project Skate. The skaters begin to take to the park and applaud each other for the Acid drops, Air, Melon grabs and many other tricks that are being performed as they too wait for dusk to set in. Other skaters sit and wait patiently for the dusk to arrive, sharing exciting skateboarding stories. It struck me that many of the skaters did not know each other, yet there was a clear relationship that existed within this subculture of a community; one where there was a willingness to mingle with one another, a mutual respect and showing of support and encouragement brought together by their common bond of skateboarding.

When the majority of people think about Australia, they do not think about poverty and inequality. We pride ourselves on being lucky – we have an extremely safe and peaceful multicultural country, with a comprehensive welfare system, schools and hospitals available to everyone. Yet this statistic speaks for itself – there are 1-1.5 million people living in poverty in Australia, that’s 6% of the population. Many of these individuals face deep social exclusion, with little hope of escaping it. COINS Australia, in partnership with Big hART and COINS Foundation seek to be a force for good, supporting social enterprise and sustainable development within these forgotten communities.

Over the last 25 years, Big hART has created some of Australia’s largest and most ambitious long-term arts projects, working off the beaten track around the country. One such project that COINS Australia/ COINS Foundation recently invested in is the Namatjira project, which resulted in a touring theatre show, a watercolour exhibition and multiple workshops. This left a fantastic legacy for the Namatjira family and Western Aranda communities as well as. 100% of the profits generated being reinvested back into big hART and COINS Foundation charitable projects.

8:30pm has arrived - dusk is finally upon us and the excitement among the skaters, spectators and organisers is building. The visual spectacle of music, movement and skateboarding commences. Skaters take to the ramps as the music and lights seemed to intertwine with explosions of colour and sounds as skaters perform their tricks. I begin to see the vision unfolding of what will eventually become an amazing show.

I found skateboarding has a little bit of everything for everyone. Skateboarding is inexpensive, opening it up to all communities. Your skateboard can take you too many places, it’s going to make you friends with all different kinds of people, all over the city and, when the Skate show kicks off, potentially the world. You can hurt yourself, it can be dangerous, but it’s also completely free and there are no rules at the Skate Parks! When Skaters fall down, they pick themselves up, dust themselves off and try again.