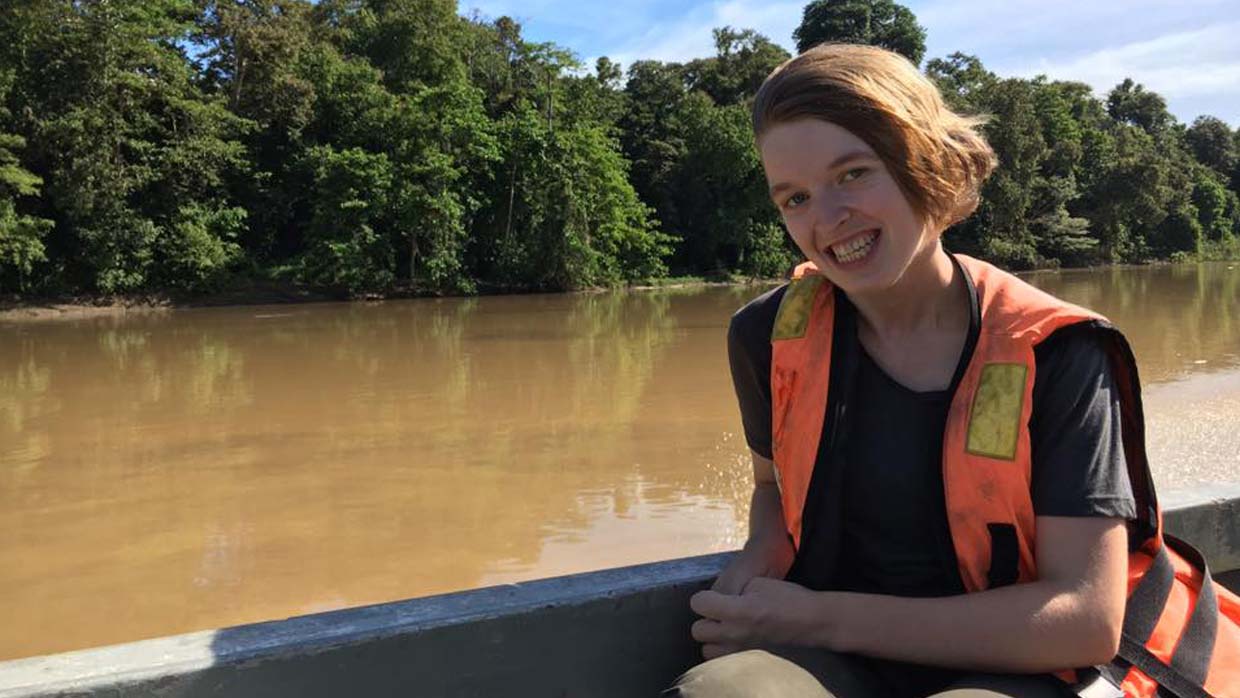 Every once in a while, you meet someone who makes you want to challenge yourself, to push your own limits further and to create opportunities that you’d normally be afraid to take.

One exceptional young lady, who’s climbed Mount Snowdon, worked in the Bornean rainforest and carried a sedated lion into a vet’s practise in Namibia continues to exceed her own expectations, setting goals that at one point she perceived to be little more than an unobtainable dream.

23-year-old University of Kent student, Amie was only the 5th pupil at Stepping Stones School when she joined in year 7 back in 2006. Amie’s disability, an ‘undiagnosed neurological disorder’ has affected her since birth where the muscles in her left arm and right leg are weaker and more difficult to control in these areas, leaving her diagonally impacted but with all limbs affected to some degree. The symptoms are very similar to those experienced with cerebral palsy (a term used to cover several neurological conditions that affect muscle control and movement), explaining how she was living with this diagnosis for the first decade of her life. An MRI scan aged 11 found no areas of the brain showing damage confirming that a misdiagnosis had occurred and remaining undiagnosed to this day.

From the age of 11, Amie’s years were filled with operations, tests and hospital stays resulting in constant tiredness and having to take large chunks of time off school, away from friends and isolated to a hospital room. Aged 13 tendon surgery on her right foot helped to correct the straightness where the foot was turned in and doctors began treating the symptoms she was struggling with and she underwent brain surgery at the age of 15. This involved deep brain simulation, similar to a pacemaker but for the brain, which would attempt to dampen down the uncontrolled movements but because it was a foreign body she was trying to reject it and 3 months of antibiotics followed to treat the infection, which would not clear so the implant had to be removed from her brain.

On meeting Amie, it’s hard to imagine a time when she was anything but the bright and confident individual who stood before me, chatting away to myself and some of the other COINS employees who she’d just been introduced to. Describing her life before Stepping Stones it was apparent that the main reasons for joining were not related to any academic limitations but her non-existent self-confidence or self-esteem, high anxiety levels and a lack of trust in adults.

“I used to hide behind my long hair and talk through my mum rather than directly to people. I wouldn’t be where I am today without going there.”

Fatigue and anxiety have always been Amie’s biggest challenges alongside struggling with fine motor skills, but she claims her difficulties have made her into an excellent problem solver over the years - she’s able to drive an automatic car with the accelerator on the left side to cater for her stronger leg. In 2011, she ventured away from the comfortable and familiar support system at Stepping Stones School to study a Level 3 BTEC in Animal Management at the local college, Merrist Wood. Amie described the transition as a huge change and remembers the first few weeks to have been pretty exhausting, the scale of the campus alone putting her body under extra physical strain, which she needed to learn to adapt to. It was here that her interest in conservation was initiated when a trip to South Africa in her 2nd year led to her volunteering on a game reserve. Her previous school trip involved a visit to Isle of Wight in Year 6 where her parents came along, ensuring that they avoided the class but were available if Amie needed them – offering an ‘escape route’ a technique she uses to manage her anxiety. This excursion marked a huge step forward for her, her first adventure without her parents and the discovery of a passion that has since shaped her education and career, returning with much improved confidence and a group of friends that she was comfortable with. The relatively smooth transition from Stepping Stones School to college was a testament to her family, the staff, pupils and safe environment that was created for her, but it was Amie’s tenacity that enabled her to keep pushing forward when things got difficult.

“I remember my Mum being told to sit on her hands during one of the Occupational Therapy tests so that she couldn’t help me – they have been a huge support both physically and emotionally helping me to find the tools to be able to help myself.”

Gaining her degree was high on Amie’s agenda and following her BTEC she enrolled in Bangor University. Unfortunately, the distance from home proved to be too much and her anxiety and confidence struggled, forcing her to return home for the sake of her own health. For someone with Amie’s drive and problem-solving attitude, admitting defeat isn’t easy but sometimes the biggest challenge is accepting that in order to move forward you need to take a step back. Returning to Stepping Stones, this time in a new role as a learning support assistant, she spent a year working under former head teacher, Neil Clark’s guidance to rebuild her health and confidence whilst challenging herself in new ways supporting the students. As the start of the new educational year came around again, with the added pressure of her time at Bangor University in the back of her mind, she moved to the University of Kent and her 4-year degree studying wildlife conservation began. The closer location of Kent offered the option to return home if she needed, which proved to be enough to ease her anxiety enough to stay. Having overcome the general everyday tasks, which in itself could have been enough to have sent her home, her determination and confidence gained from her year working pushed her through. The extent of her development was proven when she needed to move to Cambridge for six months to work for an NGO called TRAFFIC, a wildlife trade monitoring organisation, as a data entry intern as part of her year doing professional practise. Suffering from fatigue, the 9-5 working hours proved both a battle and a very steep learning curve but having a better understanding of her body enabled her to manage it more effectively so that she could do more, although she probably wasn’t quite prepared for what was just around the corner.

Having completed her placement, Amie applied on a whim for a three-month research assistant position in the Bornean rainforest, having visited the centre previously as part of a group field trip. Her longest trip previously had been a three week visit to Namibia but to her complete surprise, the application was successful and she began preparing for what would be the biggest adventure of her lifetime.

“I was incredibly anxious in the lead up and I considered backing out constantly but the knowledge that I could come home was comforting. I remember arriving at the airport in Sandakan to be picked up and they were running late, I was sat there on my own for what felt like ages thinking, what am I doing!”

Amie forced all negative thoughts and doubts to the back of her mind and faced the tough conditions head on, subjected to 35-degree heat with intense humidity combined with five or six hours a day out in the field on challenging terrain. To describe the experience as both a huge physical and mental challenge sounded like a slight understatement to me but her “give it a go” attitude clearly dominated any feelings of homesick and tiredness leaving her little option but to carry on. Talking animatedly about python searching at night, the very real threat of crocodiles when they were out on speedboats and overcoming her fear of spiders left me both in awe and also slightly concerned for her apparent lack of self-preservation. But they say that passion is a stronger emotion than fear and it becomes obvious that this takes over when Amie talks about being out in the field, about helping the animals and the research that takes place that could help to both protect them and prolong their existence. A huge turning point, Amie felt that she not only exceeded her own expectations but everyone else’s too, and her reluctance to turn down any opportunity that presented itself has a strong part to play in this.

Speaking openly about her journey, being accepted at UCL to do a Masters in conservation in September, with plans to eventually work in Asia or Africa you can’t help but be a little overwhelmed at what she has already achieved and how far she has come. Looking back, Amie would have loved having someone older who she could relate to so she’s putting the extensive experience she has built up over the years and is currently mentoring an 11-year-old girl with cerebral palsy.

“It’s really great working with the younger children and seeing them recognise that you understand what they’re going through. Looking back, when you see your friends run away without you, they’re not being mean, it’s a compliment because they see you as a person.”

A true reflection of someone’s character is not how they speak about themselves but how they’re seen through the eyes of others and hearing some of the stories and reminisces of Amie in the younger days certainly confirms the pride that others see in her. I hope if any thoughts of doubt creep in to her tenacious psyche, she remembers how many people believe in her and that her own words echo back:

“Don’t be afraid of failing, take a deep breath and take a chance – you never know what might happen.”