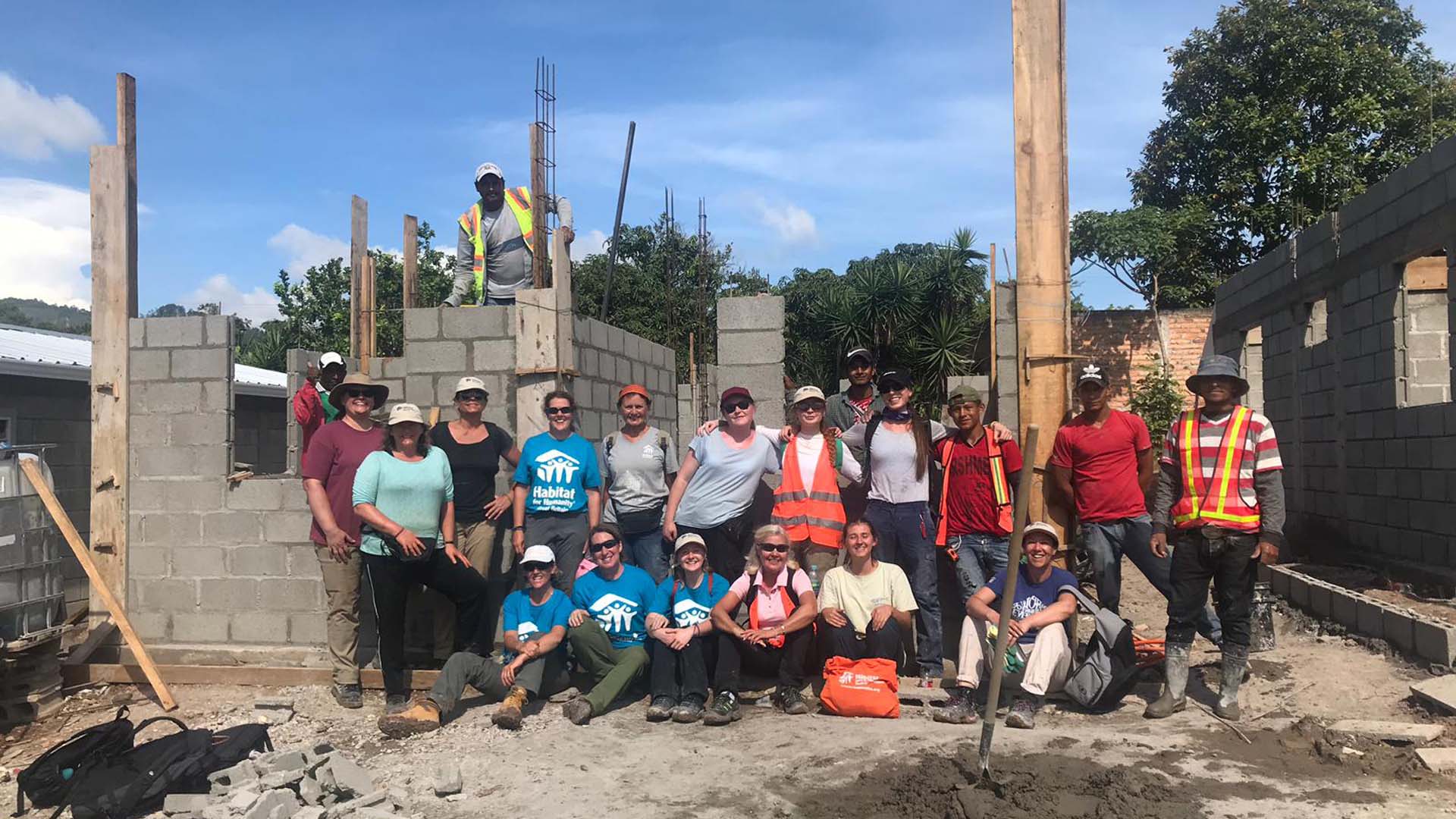 Whilst travelling and group gatherings are on hold, we caught up with COINS employees Carol (UK Technical Services Manager) and Claudia (Customer Partnership Manager) who last year travelled to Honduras with Habitat for Humanity for the 2019 Women Build.

COINS has been a long-term partner and support of Habitat for Humanity, who believe that having a safe place to call home is a key element of alleviating poverty. Their mission is to build an environment where families and communities can thrive, and COINS have been part of several builds and projects over the years.

“Seeing other builds with colleagues going off to do the same and the fact that it was somewhere like Honduras was a big motivation for getting involved. I’d never normally go there and knowing that you’re going to do something and help people sealed it for me.” Claudia explained.

Carol: “We’d spoken to others who had done the build, but we knew that they were all going to be different, so going out there we didn’t really have any expectations – we just knew that we were going to build a house.”

Having been in contact with their team leader from Habitat before the trip, Carol and Claudia had the basic information, such as what to pack and where they’d be staying, but the first day was a true initiation to the Honduran way of building. The most notable difference was there were no shortcuts, no machinery or power tools, everything was done by hand, which meant the range of tasks included; digging trenches, hauling rocks, making rebar enforcements and much more. Very quickly, mixing cement became a well-practised and necessary skill for the week:

“If they had a delivery of sand it came in tonnes which was in the form of grit and you threw it at a mesh so that all the stones would be one side and the sand on the other. You then loaded the sand into a wheelbarrow – you didn’t have the luxury of a digger or anything.”

Despite the obvious physical effort, both Carol and Claudia were both quick to reassure me that experience and physical fitness isn’t a necessary requirement. It didn’t matter because you could do as little or as much as you were comfortable with and everyone learnt ‘on the job’. The biggest impact for both of them was meeting the families and seeing who would benefit from their hard work once the houses were complete, adding a personal context to Habitat’s work that transformed their efforts to ‘build a house’ into ‘building a home’.

“I remember on the first day, we had one of the families there and a mum and her little girl came to speak to say how thankful they were, it was so moving to think we’re building them a house to live in, somewhere safe where she’s going to be able to bring up her daughter and they’ll be able to play in the street. To think we were giving someone a home - I’d have liked to have done the finishing stage so that we got to see that happen.” Carol

Claudia: “When we arrived and heard people talking about families that have been flooded out of their houses with three children and they haven’t got anywhere to go, it really hit home.”

The majority of the stories were rarely about the build itself, but memories that brought life to the area, like the village children coming to their university and performing their national dance in full costume, or the mother who did her family’s washing in an outdoor sink next to their break tent.

“There’s a perception that people living in these less developed countries don’t have the same standards, but this mother had a wash board concreted into this outdoor sink and that’s where she did all her family’s washing just using a great big bar of soap. She’d always give us a smile and the washing was spotless - it smelt amazing too!” Claudia.

United in their goals and mindset, their teammates played a large role in the success and the enjoyment of their time away and Carol and Claudia described how the group personalities made for a more relaxed and supportive environment.

“We were always talking about the build or what happened during the day and we all had the same mind set so we all got on. We had lots of laughing and singing – there was a great camaraderie and we all looked out for each other, making sure we were stopping for water and not overdoing it.” Carol

Sticking to groups of 3 or more, even in the more touristy areas, their guide Louie also showed them around some of the more rural parts of Honduras, allowing them to see much more than if they had gone on their own, where their inability to converse with the locals would have been a challenge.

“We were doing some filming when we got back, Jake was asking questions about my family and where I spend Christmas and it made me really emotional thinking about all the things that we really take for granted in our western ways and our creature comforts.” Claudia.

“It was great that we had each other but having now done a build it definitely wouldn’t bother me going by myself – everyone made each other feel really welcome. I think people are also a lot friendlier when someone is on their own, so you make an effort to include them.” Carol

Claudia agreed: ”On the first night all 15 of us went for dinner and they asked everyone what we were thinking about when we came out and pretty much everyone said they’d felt anxious and nervous, but as soon as you land and meet everyone you’re going to work with you just instantly bond.”

On reflection, with the current world situation and the restrictions on travel, Carol found herself thinking of ways their efforts could instead be used to improve efficiency in their build process. The initial awkwardness of sharing a room with someone you haven’t met before and a unique toilet that sounded like a cow when it flushed paled into insignificance alongside the experiences and memories that they brought home. To have a better understanding of the real challenges and appreciation that hard work can only take you so far unless the right opportunities are there for people to work towards is an important part of shifting perceptions and a long-term benefit of experiencing the build in person. The fact that their final day coincided with Independence Day celebrations – well that was just an unexpected bonus!

Claudia and Carol’s top tips for anyone considering going on a Habitat build:

-      Reach out to your team leader and find out about accommodation, packing etc – it all helps when you’re trying to pack light!

-      We all had good boots, but I’d definitely take better quality gloves and if it’s a hot climate, good sweatbands.

-      Take lightweight and quick dry clothes so you can wash them in a sink if there aren’t any washing facilities.