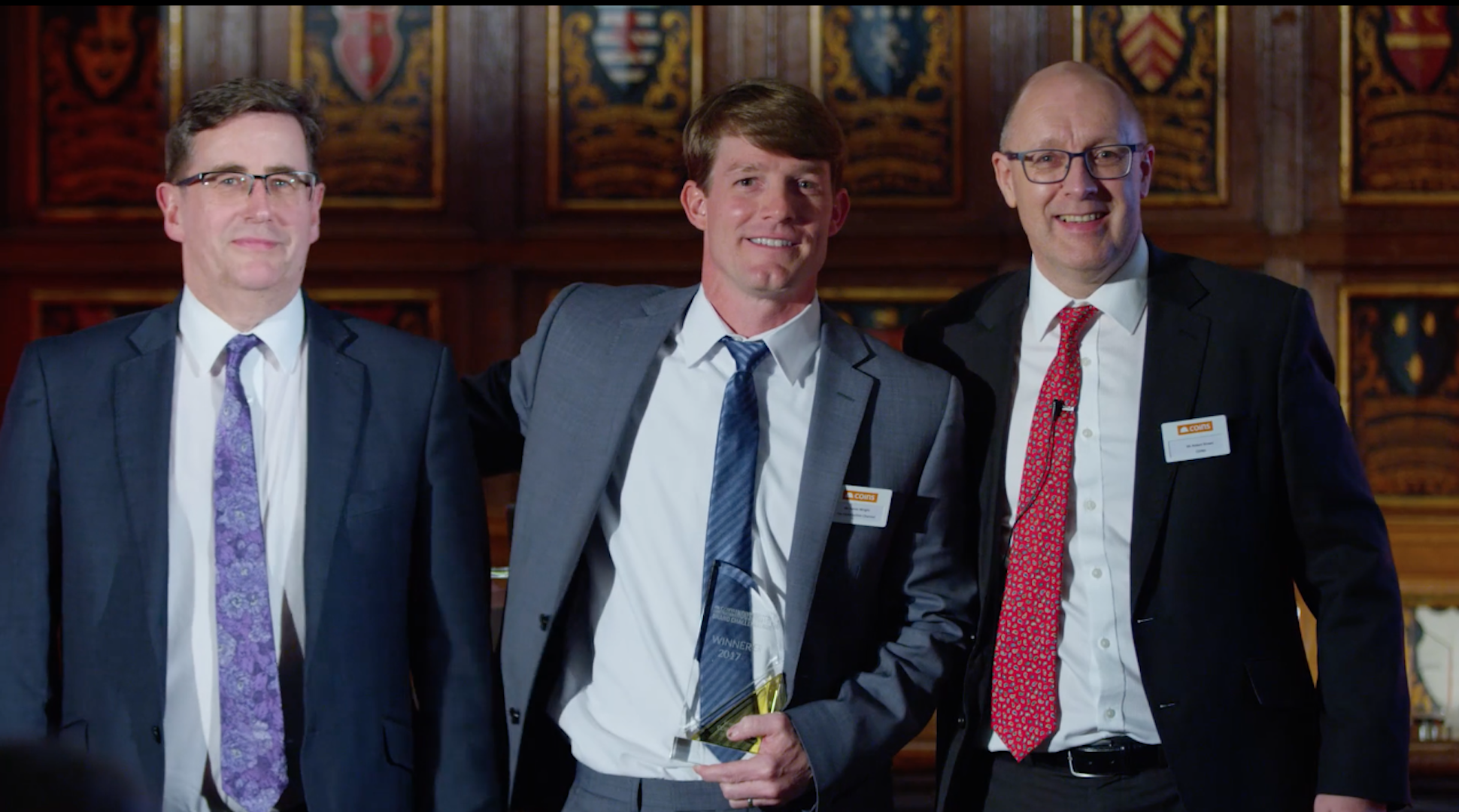 On Wednesday 8th February, finalists of the COINS Grand Challenge joined together in London alongside industry experts for the Gala Dinner and Awards Ceremony.

The Leadership Challenge was searching for an exceptional candidate who demonstrated the qualities to lead, inspire and who possessed the determination to deliver a viable concept that has the potential for big impact. The winner of this award went to 36 year old Aaron Wright, Founder of The Construction Channel.

“The Construction Channel is a creative engine focused on construction industry news, markets and materials, stories and people, and entertaining content for the world of builders. We're developing a digital network of Construction TV to showcase construction projects."

With videos accounting for 74% of all online traffic, Aaron’s idea ticked all the boxes for the judge’s criteria, with endless opportunities for development and reach. In addition to starting up The Construction Channel, he also works as an Assistant Project Manager for MJ Harris Construction in Birmingham, Alabama, and part-time as a Professor at Auburn University, all alongside what he describes as his main job – being a proud father of three children.

“I first came up with the idea in college in 2004 watching the weather channel and thinking about how people need to know what's happening around the world in construction. 10 years later, whilst driving to work, I felt a presence saying you should check back into this and that's when I started really focusing on making the idea become a reality and I secured a US trademark on the name after 3 attempts.”

Originally inspired by The Golf Channel after discovering that the Founder was also from Birmingham, Aaron’s research showed him that there wasn’t much content available on good, quality construction, illustrating a missed opportunity. His teaching connections also played an influential part, where he wanted to be able to offer students a real insight as to what it’s truly like being involved in the construction industry and what better way than for them to be able to watch, behind the scenes footage and listen to real stories. He believes that the industry needs a modern re-model and is passionate about contributing to changing the way that the world watches construction.

When asked of any potential influencers Aaron was quick to credit the Founder of ESPN, Bill Rasmussen, who offered some key advice in that whilst you may have a big idea, as in sport, it takes a great team working together in order to achieve something big and game changing. He also gave Aaron a reminder that has clearly stayed with him:

“No matter how small of big you can still focus on doing what you love, following your dreams and making a bit of magic happen.”

Describing the COINS Grand Challenge as one of his biggest achievements, an honour and a life changing experience, he admitted to being fairly confident when entering that it was something he believed that he could win.

“The COINS Leadership award was truly a life changing experience. I prepared harder than I've ever prepared, practicing before and every step I took was focused on winning this Award. The results have been a miraculous boost in confidence personally and professionally for my company and The Construction Channel. After that trip, I fell in love with London and the people I met during my visit. It is one of my favourite places now and I will cherish the entire experience forever.”

Aaron was quick to thank his father and grandfather, Len Corcoran, Darko Djuric, his team with Martinez Palmero Construction, and the entire team with MJ Harris whose support enabled him to enter the competition, not forgetting his family and the support from friends and business partners who have helped to shape his career.

“I want to be the Sky Sports for Construction, showing the good, bad and the dirty side of our business. My idea is gaining more momentum and more people and companies are starting to actively embrace the idea of a Construction Site as a Filming Stage. There are so many plans and projects I have in store including creating stories and shows for construction companies and manufacturers who want to be featured on The Construction Channel. I also want to pursue full length movies and documentaries and I hope someday to be the Netflix for Construction - now that's an ambitious goal!”

It is this aspiration and belief in his idea, his own abilities and the team around him that has led to the success that he has already had to date and undoubtedly will have in the future.