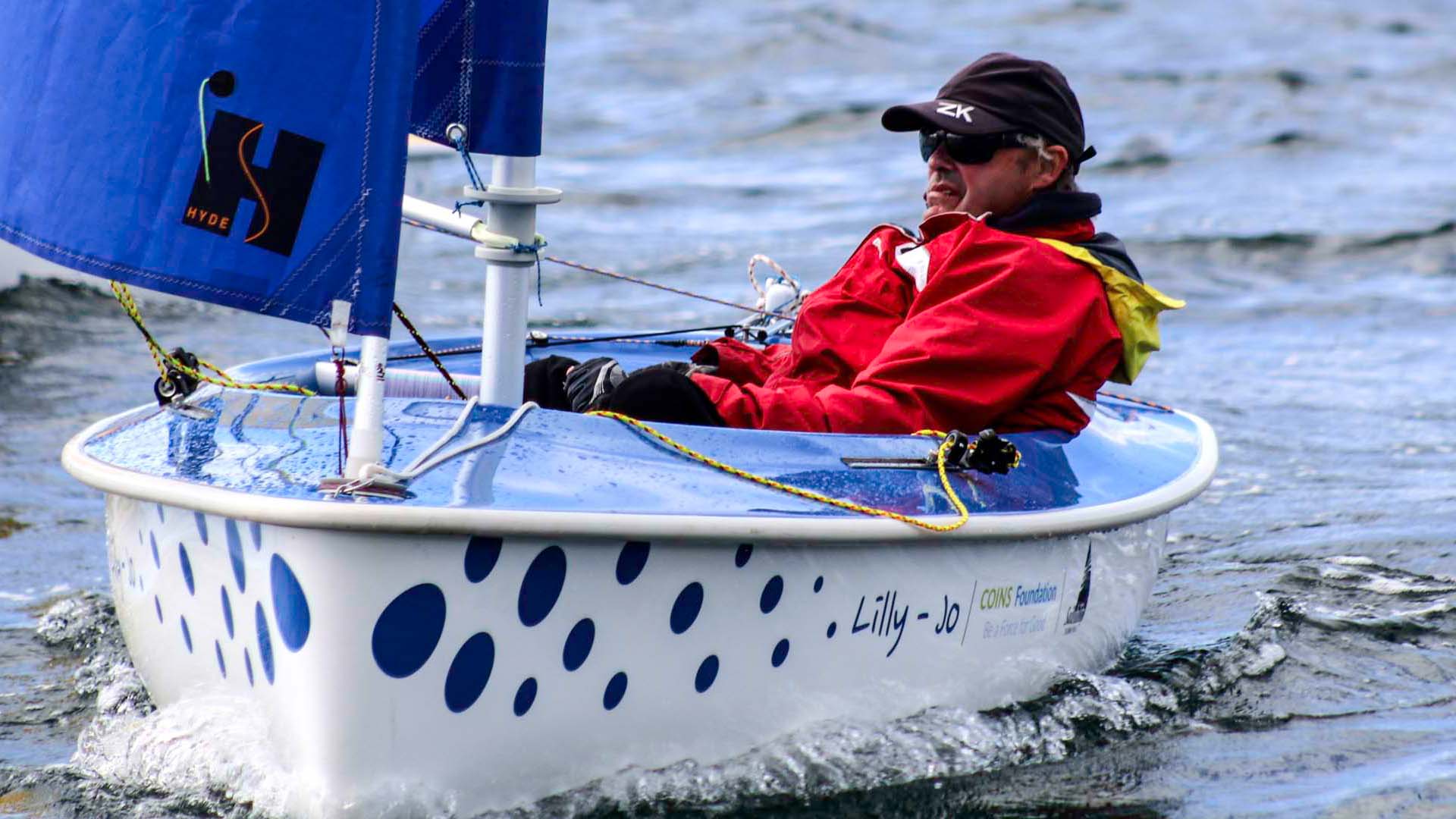 Chris Symonds - Taking on the World

Chris Symonds (57) is an International Para Sailor from a small town in Wynyard in North West Tasmania, Australia.

Despite suffering from Kennedy’s Disease, a rare and progressive genetic condition affecting mobility and speech, Chris competes at the highest level in both Para competitions and Open events, racing (and winning) against his able-bodied peers.

Chris’ passion for sailing was sparked when he was just 9 years old and a family move led him to within 100 yards of Wynyard Yacht Club, which soon became his local playground and undoubtedly the catalyst to his success.

“When I was 10 years old the Wynyard Yacht Club grouped 12 parents together and they all chipped in to build 12 small timber training yachts. We were one of those families, so we had our first yacht and the love affair with sailing began.”  Chris Symonds

The disease affects the motor neurones with increasing weakness and wasting of the muscles and, as a result, Chris was struggling in certain conditions where strength rather than skill was necessary. He was finding that in stronger winds he wasn’t sailing as well and as the effects progressed other tasks such as pulling start the outboard motor, moving from side to side or climbing into his trailer sailor yacht became more difficult. It wasn’t until 2002 when Chris was diagnosed with Kennedy’s Disease that many of these additional challenges and struggles were fully explained. As his condition worsened, it reached a point where Chris feared his sailing career had reached its final destination and a future of being restricted to solid ground and administration tasks looked almost certain. Chris’ prayers were answered when they discovered the Hansa 303, a class of yacht that he believes allows him to compete equally alongside able-bodied sailors, particularly in light to medium winds where his skill makes up for any physical limitations.

Competing in Open competitions Chris has dominated both his disabled and able-bodied competitors where he is the current National, Asia Pacific and World Champion in the Hansa 303 singles classes. To prove his consistency, sailing alongside his sailing partner and coach, Mike Darby they are also the reserve champions in the doubles classes for the Worlds and with his long-term crew Jeannine Nicholas in the Asia Pacific and National events. Chris’ extensive list of accomplishments contradicts any suggestion that he might be disadvantaged in any way, a huge testament to both his skill and commitment to the sport he loves.

Chris’ next big goal is the Para World Championships in the United States in September where he’ll be looking to go one better and move to the top of the podium after winning a Silver medal at the Worlds in Germany last year. Having prioritised this over the Open World Championships in Japan, preparation is already underway and they will continue training over their winter months in Bass Strait and on the Highland Lakes in Tasmania where conditions are similar to the ones he’ll face in September.

“The objective of COINS sponsorship of the Wynyard Yacht Club is to achieve real and positive change in the lives of individuals, communities and business. By doing this we hope to influence the way people perceive poverty, disability and injustice.” Carla Wall - Managing Director of COINS Australia

Looking ahead, Chris is aware that he may continue to face further challenges as his condition progresses but alongside his coach they are already looking for strategies that will enable him to continue sailing. Beyond the World Championships, the big goal is to have sailing reinstated back into the Paralympics for Paris 2024 so that he can have the opportunity to represent his country at the biggest event in any athlete’s calendar.

“I have a passion for ensuring inclusion in communities and I’m proud of what the Wynyard Yacht Club and COINS have promoted in this area.” Chris Symonds

Sharing both his time and knowledge generously, it’s not just his future that Chris considers, where both himself and Mike are described as giving back in more than equal measures through their commitment to making sailing accessible to all. Both are kept busy mentoring and training young sailors from taking their first steps into a boat right up to competitive sailing, inspiring and influencing the next generation including Tasmania’s first blind sailor who now crews with Chris alongside his solo ambitions.

“Their work with people with debilitating degenerative neurological conditions is extremely impressive. They have become inclusive leaders for the club.” Neal Rodwell

Speaking fondly and humbly of all the support he’s received over the years it is evident that the people around him have played strong roles in this journey and to be able to share this with his family obviously means a lot to him. When I asked Chris if he had any advice for young sailors, unsurprisingly, he had many pearls of wisdom to pass down; embrace change, remember to be a good person and remain fair, stay positive and never give up. For me, after hearing from Chris and others who’ve spoken about him, the one sentence that I believe encapsulates Chris, as an individual and an athlete is the following:

“Follow your dreams; you can achieve amazing goals if you stay focussed on them.” Chris Symonds